Why do the British public support moderately left-wing policies, but fail to vote Labour? 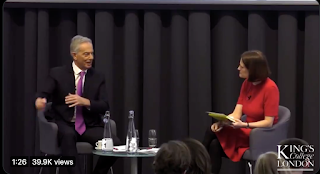 Centrists, like Blair, who argue Labour must return to centrist policies to have any chance of winning again, have a problem with polling that shows moderately left-leaning Corbyn-style policies (e.g. free university tuition, free childcare, nationalised rail, higher taxes on wealthiest, etc.) were and still are popular.

Centrists need to explain that polling away.

Of course, they respond by saying ‘But Labour lost in 2017 and 2019! So the policies can’t be popular, can they?’ In addition, Tony Blair is now adding this:

Supporters of moderately left-wing Corbyn-style policies, on the other hand, can much more plausibly explain why public enthusiasm for left policies didn't translate into winning. The MSM coverage of the actual policies was largely non-existent, so people were often unaware that they were Labour policies, as this video shows.

Media coverage instead focused on character assassination (antisemite, terrorist sympathiser, etc.) and fostering a perception of the Labour left as extremists, thugs, trots, bigots, etc. This was in large part down to the work of centrists inside and outside the Party, including Tony Blair himself, feeding the MSM that line on a daily basis.

There is good evidence that the public largely didn’t know what Labour’s policies were, but just thought Labour must be extreme, Stalinist, etc. because, after all, that's what Tony Blair and the centrists were telling them.

So, despite the manouevering from Blair, the evidence clearly supports the lefts’ diagnosis more than it does the centrists'.

Still, centrists and those on the right (Tim Montgomerie has already done so) will seize on Blair's not-terribly-plausible attempt to explain away the polling evidence that the public are actually rather more left-wing than he is, because it allows them to retain their beliefs in the teeth of evidence to the contrary.

Incidentally, Blair's suggestion that these two points explain why Thatcher was popular despite e.g. privatisation and tax cuts for the wealthiest not being popular policies is implausible. Blair is actually suggesting that 1. people didn't like Thatcherite policies individually but did collectively, and 2. did like them after a 3 minute conversation because Thatcher was, er, actually right according to Blair.