Louise Mensch's twitter use of a photo of Jeremy Corbyn 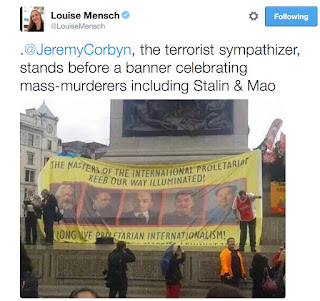 Louise Mensch tweeted this on Jeremy Corbyn. She appears to have taken the image from an article in the Spectator published the day after the rally. In the Spectator article, Corbyn is not even mentioned. So how did Mensch know it was Corbyn in the image? Not from the image, presumably: see the enlargement of his face, which is just pixels (below). Perhaps Mensch just guessed it was Corbyn?

In fact, I think it was Corbyn, given the clothes match ones Corbyn can be seen wearing that day. However, it is NOT a banner Corbyn spoke in front of, as many will have assumed from Mensch's tweet. You can easily find via Google pictures of Corbyn speaking that day 1st May 2014, in which it's clear the offending banner is nowhere in sight (please look here and here).

What's the significance of this? Not very much. Frankly I couldn't care very much if Corbyn had spoken in front of the ludicrous banner. However, he didn't, and in fact it is clear that in the picture he is deep in conversation, that the place largely empty, and that two people are just hand-holding the banner up. The banner was not a rally fixture, even. It's just being waved around by a couple of clowns while Corbyn looks in the other direction.

PS If the picture Mensch tweeted was taken early (and I guess it was - looks like Corbyn has a clipboard and is preparing for the event) then those holding the banner were actually told to clear off! So much for the thought that Corbyn is 'comfortable' about appearing with such banners. 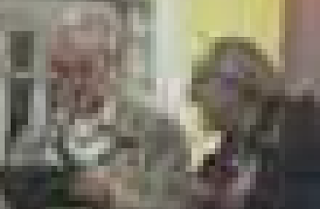 TTIP Ruined my Xmas said…
I am not a Labour supporter myself, but one thing I have a great deal of respect for Jeremy Corbyn over is his strong opposition to the TTIP agreement (Transatlantic and Trade Investment Partnership) which is strongly supported by the Tory leadership and is being negotiated between the EU Commission and US government.

TTIP is a very large trade agreement that contains what is known as a bilateral investment treaty. A bilateral investment treaty grants corporations the right to sue entire nations, in a process that by-passes our domestic legal system entirely, in a parallel, privatized, legal system called arbitration, where the judge and jury are 3 corporate lawyers (who can work for the corporation suing the country at a later date), whose decision is binding under international law, and for which their is no right of appeal from civil society.

Grounds for arbitration include regulating the public interest in a way that damages expected future profits of a corporation (so renationalising parts of the NHS because private health care providers were providing an inadequate level of service for example).

TTIP will harmonize our consumer product standards with those of the USA, so for example, European farmers will be faced with competing with American farmers that aren't obliged to follow our animal welfare or health and safety practices, putting our domestic farmers at a serious competitive disadvantage unless they lower their own standards to American levels (which no one who cares about animal welfare could possibly want).

For anyone that is interested, here is a link to an official petition for a referendum on TTIP in the UK. It has to reach 100,000 thousand signatures for a debate in the British parliament to be considered and currently stands at 31,365:

For further info on TTIP, the well known BBC documentary maker David Malone has produced some excellent presentations on the subject. The first here deals with the arbitration side of things and is about 20 mins long (to Mr Malone's left on the video are John Hillary from War on Want and Linda Kaucher from the LSE). The second is a 98 min solid introduction to the agreement as a whole: