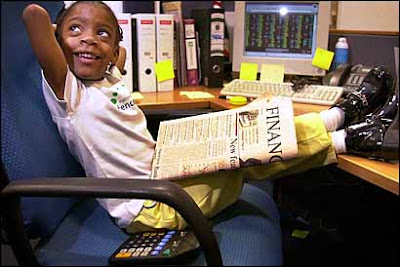 There have been a number of cases in which people with no financial expertise have been pitted against financial investment experts, to see how well they fare on the stock exchange.

Here's one example from 2002 (scroll down - it's the only one I could find on basis of a quick search). Of course this, by itself, is merely anecdotal evidence that the supposed skills of stock market gurus are largely mythical.

In this example, a financial analyst, using his expertise and computer analysis, lost 46.2%, over the year while five year old Tia's portfolio, picked at random, jumped 5.8%. Even the astrologer investing on the basis of planetary movements did significantly better than the supposed financial expert.

Be interested to hear of more examples (can't find any at the moment, though I've certainly stumbled upon a few in the past) or of any evidence to the contrary. Does anyone have more information or examples?

What's really interesting about this case is that were five year old Tia actually working for a big bank, she would have been awarded several million in bonuses for her amazing abilities in 2002. Moreover, other banks would be looking to poach her, offering even more lucrative contracts and bonuses (and why shouldn't they take that risk, given a few million quid is peanuts to them if she can outperform their other traders by even 1%?)

Most importantly of all, Tia would now become what's known as a "rainmaker", attracting wealthy investors. And her increasingly large investments might now tend to outperform others. Why? Because other investors would now tend to follow her lead, thus causing her randomly generated guesses as to what stock will rise to actually come true. So Tia's predictions might tend to become more accurate. And yet she's a five year old girl with no financial skill whatsoever.

So how much of what goes on on trading floors is dumbass trader sheep following round the lucky Tias? Here's the news report:

A five-year-old girl is still beating the stock market and financial experts after randomly picking shares.

Each invested a virtual £5,000 in a fantasy portfolio during National Science Week 2001, with Christeen choosing stocks based on the movement of the planets and Mark using his expertise and computer analysis.

Tia, who picked her stocks at random by grabbing numbered notes representing each company in the FTSE 100 Index, won last year's competition as her shares performed best during National Science Week.

The test of time shows Tia is still a winner, with her portfolio the only one to gain value a year later.

Post Script: also just found the following opinion, for what it's worth. I wonder what studies are being referred to? I have often heard it said, but have not really looked into it before: "The reality is that luck and not skill explains outperformance by fund managers. Many studies conclusively demonstrate this fact. Neither Ms. Ralbovsky nor anyone else can help you find the next lucky quant fund manager." Go to "The Myth of The Stock Market Guru" by Dan Solin here.

Anonymous said…
Another experiment to confirm that a dart board or a monkey is just as good as well in the random market.

Just another confirmation how the merchant/investment bankers are overpaid for contributing nothing to the economy.
January 11, 2011 at 10:08 PM

McDullard said…
Hmmmm. It's a bit more complicated than that Stephen. You would do well to read 'Fooled by Randomness', by Nassim Nicholas Taleb.

I have a pretty low opinion of most fund managers (which is why i don't invest in funds) but just because a fund has performed badly doesn't mean it has been poorly managed.

A's idea is to spread his money over a wide range of investments (this is essentially what you pay funds to do for you) thus minimising the risk of losing all of it, and increasing the chance that a substantial part of it will do very well.

B's idea is to buy about 200 lottery tickets a week.

one year later A's portfolio has lost a good deal of its value and B has won the lottery.

Would you really say that B's idea had been a sensible one? or that B deserves praise? or that A deserves blame?
January 12, 2011 at 1:14 PM

Rocky said…
Presumably you'd have to compare large numbers of traders vs laypeople (or monkeys or random number generators or what have you) to draw the conclusion that traders are simply chancers/gamblers etc. that aren't any better than Joe Average, one isolated comparison means very little (if anything at all) really, sort of like the fact that there are FA cup upsets every year, but over time the results of the big teams vs the small teams are considerably better in favour of the big teams
January 13, 2011 at 6:32 PM

Stephen Law said…
As I say this is merely anecdotal evidence. However, I think it was designed to illustrate something that is actually well established, that those who play the stockmarket in this way do no better than someone picking at random. My final quote alludes to such studies but I haven't got any references and would like some.

Of course the relevance of this to the current enormous bonuses being paid to bankers is obvious.
January 13, 2011 at 7:20 PM

Stephen Law said…
I mean they generally do no better on average than those picking at random. Some will get lucky and do better, like Tia, and some will do worse.

Hugo said…
The lesson to draw from this and similar results is to not put your money in managed funds.

You have not shown that the banking sector (the whole thing?) is a scam. No one actually working in the field would talk about "stock market gurus".


It's true that someone might have a flawed business plan which makes them a massive profit and bonus 19 years out of every 20, but loses money overall. Their strategy would appear to work for a long time despite being unsound.

The solution to that is simply to ban maturity transformation (http://unqualified-reservations.blogspot.com/2008/09/maturity-transformation-considered.html) and then never bail out banks again.
February 6, 2011 at 4:45 PM