Al Jazeera's investigation into Labour dirty tricks and smears against the left. Part 1. 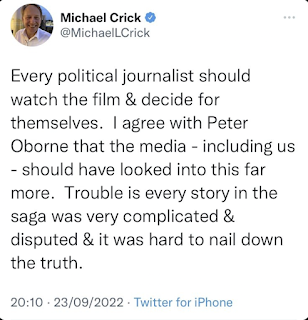 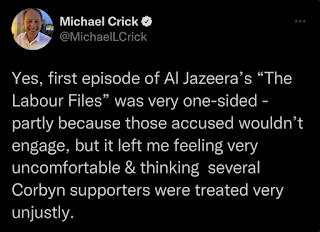 Typically, there was no pushback at all from journalists when allegations were made. Not even from the Guardian and BBC, who mostly just uncritically and repeatedly recycled the poisonous allegations.

You can watch 'The Labour Files' on Al Jazeera's youtube channel and here: https://www.youtube.com/watch?v=elp18OvnNV0

Crick says it was 'hard to nail down the truth'. In many cases, it really wasn't. For example, the famous Angela Eagle brickgate story (not mentioned in this programme: it was alleged leftist thugs had thrown a brick through her office window) falls apart after 5 mins of investigation (it wasn't her office window; it was a window in the same building facing a public alley with a reputation for dodginess; there was no evidence *at all* that any leftist was involved; acc. to police there wasn't even any evidence a brick was thrown) etc.. Story after story would turn out to be BS, and this was pointed out again and again, but mainstream journalists weren't interested.