Tim O'Neill's Blogpost on my paper 'Evidence, Miracles, and The Existence of Jesus'. 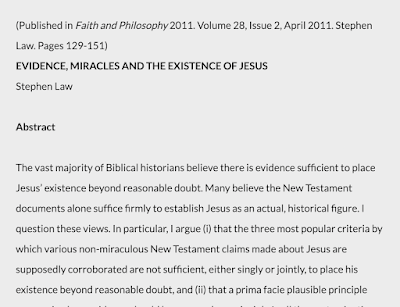 A while back I wrote a paper on the existence of Jesus. It is available here. I wrote the paper because I was struck by the vehemence with which many Biblical experts insisted that anyone who doubted whether the New Testament documents alone establish the existence of Jesus beyond any reasonable doubt was a crank, or at least horribly ignorant.

In my paper I argue (i) that the three most popular criteria by which various non-miraculous New Testament claims made about Jesus are supposedly corroborated are not sufficient, either singly or jointly, to place his existence beyond reasonable doubt, and (ii) that a prima facie plausible principle concerning how evidence should be assessed – a principle I call the contamination principle – entails that, given the large proportion of uncorroborated miracle claims made about Jesus in the New Testament documents, we should, in the absence of independent evidence for an historical Jesus, remain sceptical about his existence.

Here is the contamination principle:

Notice that my paper does not claim P2 is true. Rather I suggest P2 is prima facie plausible. I explain why a number of objections to it fail. I also attempt to justify the principle using two thought experiments: The Ted and Sarah Case and the Case of The Sixth Islander.

Also notice that I do not argue for mythicism - the view that there probably was no historical Jesus. In fact I am clear that I am sceptical about mythicism. I say, early on:

I even say, at the end of the paper, that the NT documents may make Jesus' existence more probable than not:

All I question in this paper is whether the NT documents alone establish Jesus's existence beyond all reasonable doubt.

Notice I don't even claim that the NT documents don't establish Jesus's existence beyond reasonable doubt. Rather, I present, for discussion, what I suggest is a prima facie plausible argument for thinking that they fail to do that.

Please notice the care and attention with which I spell out my position, repeatedly, in this paper.

Tim O'Neill's Piece on My Paper

In a blog post on his site History for Atheists, published in March 2022, Tim O'Neill takes me task. He has also more recently criticised my paper on twitter.

I promised a response, and here it is. However it will have to be in instalments.

O'Neill's blog post attacking my paper is almost 9,000 words in length. There are some more meaty bits towards the end that are genuinely interesting and do deserve discussion. However, much of O'Neill's post is an extended Gish Gallop of misrepresentations and irrelevancies. So I am only going to address the opening sections here. I'll come back to later parts as and when I get time.

Incidentally, O'Neill is not, and does not claim to be a historian.

O’Neill begins by devoting 1,600 words to Jesus Mythicists and their arguments. Of course, I am not a mythicist, so let’s put those first 1,600 words to one side.

However O’Neill concludes those 1,600 words on mythicism like so:

The more simplistic version of the argument against the historicity of Jesus by reference to the miraculous elements in the gospel narratives does not carry much weight...

But in 2011 the British philosopher Stephen Law decided to venture out of his field and into history and presented what he clearly felt was a much more comprehensive and persuasive version of the argument.

That's right: O'Neill paints me as a mythicist, as presenting a version of the argument for mythicism. A position I very clearly, and repeatedly, reject.

He does it again at the end of his tirade, suggesting I think we have evidence Jesus is not an historical character.

Also notice, incidentally, that O'Neill's selective quote here misses out the context that makes it clear that not only I do I explicitly reject mythicism, I don't even claim that we should be sceptical about existence of Jesus.

This is such a blatant misreading of my paper that it really doesn't bode well for the remaining seven and a half thousand words of O'Neill's blogpost. It has certainly led people to think that I am a mythicist.

Next up, O'Neill spends 1,000 words attacking a passing reference I make to St. Paul's writing in the Old Testament. I say:

Paul may have known some of those who knew Jesus personally. Paul claims to have received the Gospel not from any human source or teaching but by revelation from the miraculously risen Christ (Galatians 1:11–12, 15–16).

O'Neill spends his 1,000 words focussed entirely on the second sentence, which he quotes. He ignores the first sentence. For context, here is Galatians 1:11-12:

For I want you to know, brothers and sisters, that the gospel that was proclaimed by me is not of human origin; for I did not receive it from a human source, nor was I taught it, but I received it through a revelation of Jesus Christ.

O'Neill goes on to suggest that Paul doesn't mean in the above passage that he got everything he knows about Jesus' life from Jesus himself, only the very specific 'good news' that non-Jews can also be saved if they believe.

O'Neill also adds that in other places (e.g. Gal 1: 15-16) where Paul does say he got information about Jesus's life from Jesus himself, this should not be taken to imply Paul didn't also get it from other, human sources.

1. I was very careful to use the word 'Gospel' when I said Paul claims to have received 'the Gospel' not from any human source. That's because I was myself unsure what Paul meant by 'Gospel' in this context. For that reason, I was careful not to provide any interpretation of 'Gospel'.

Notice I don't claim Paul says he got everything he knows about Jesus solely and exclusively from Jesus alone - in fact I rather doubt Paul is claiming that.

And you can even see above that I myself point out that Paul may have known people who knew Jesus personally, (and so also received information from them as well). Why did O'Neill cut that line from his quote of me, I wonder? Here is how O'Neill sums up my position:

Again, this is just wrong. I don't think, and I don't say, that Paul says everything he knows about Jesus comes from Jesus himself and not from anyone else. And in fact I am clear he may have got information from other sources. So O'Neill is misrepresenting me.

I guess you might fairly pick me up on using 'Gospel' unclearly. But what I meant to suggest was that Paul said that some of the information he had about Jesus he got from Jesus himself. Which is kind of interesting, and true. So I mentioned it in passing.

In short this 1,000 word passage from O'Neill on my single sentence on St. Paul not only misrepresents me, it's an irrelevant side-show so far as the argument of my paper is concerned.

I'll stop here for now... But you can already see that, to say the least, O'Neill is not a careful or charitable reader. In his haste to rubbish me as an incompetent novice he completely misreads me.

He is also, incidentally, a bit of an arrogant prick. 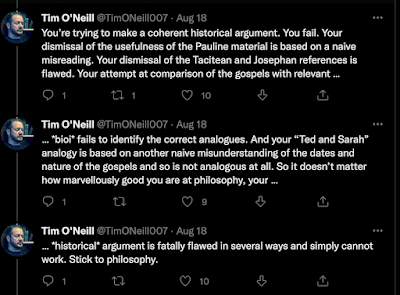