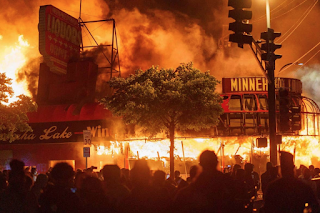 Many of us are familiar with the Post Hoc Ergo Propter Hoc Fallacy ('after this, therefore because of this) - Post Hoc Fallacy for short). It's the fallacy of supposing that, because B occurred after A, A must be the cause of B. For example:

My car stopped working after I changed the oil, so changing the oil caused it to stop working.

I wore my red jumper to the exam and I passed, so that jumper is lucky: it caused me to pass.

This fallacy is so common, it gets a latin name. However, there's a related common fallacy that I think also deserves a name. I am going to call it the Non Post Hoc Fallacy ('not after of this, therefore not because of this), or, perhaps more memorably, the David Cameron Fallacy.

Every now and then someone desperate to ‘prove’ that X is not causally responsible for Y – e.g poverty is not a cause of crime, will commit the following fallacy. They will argue that as X has often occurred without Y following, therefore X was not the cause of Y in this case.

Back in 2011 many right-wingers were desperate to show that poverty was not the, or even a, cause of the London riots. In order to try to show that, they pointed to poor people and areas where no rioting occurred. UK Prime Minister David Cameron said: “These riots were not about poverty. That insults the millions of people who, whatever the hardship, would never dream of making others suffer like this.” A letter to Newseek magazine argued: 'Saskia Sassen blames conditions in disadvantaged areas for the UK riots, ignoring urban areas for the UK riots, ignoring that other deprived regions – Glasgow, Tyneside, South Wales – didn’t riot.' That was fallacious reasoning. Compare:

Clearly, Jim’s smoking could easily be a – indeed the cause – of his lung cancer. True enough, smoking that much is not causally sufficient to produce lung cancer. Various other factors have to be in play too, including genetic factors, etc. However, the fact that only a minority of those who smoke 40 a day for 40 years end up with lung cancer does not show that smoking does not play a – perhaps even the – key role in producing the lung cancer of those who do smoke that much.

Journalist James Bloodworth made the same mistake back in 2016, arguing ‘The West is not responsible for Jihadist violence, Islamist ideology is.’ His argument? It’s as follows:

Yet if, as some suggest, American imperialism really is the “root cause” of modern anti-Western terrorism; if the West really has brought terrorism on itself, there are several questions that urgently require an answer. First of all, where are the Cuban, the Argentinian and the Chilean suicide bombers? Where are the Guatemalans and the Brazilians intent on the random slaughter of “unpure” populations and the mass capture of sexual slaves ? If fanatical religious ideology isn’t the main driver of the spate of recent attacks, where are the masked Latinos rampaging through parks and shopping centres with Kalashnikovs?

As any good anti-imperialist ought to know, outside of South East Asia there is arguably no part of the world that has suffered more under the heel of American imperialism than its own supposed back yard. The Middle East certainly hasn’t. Where, then, is the supposedly inevitable blow back . Source.

Now, as a matter of fact, I don’t doubt that Islamist ideology is a cause of Jihadist terror attacks on the West. But that doesn’t mean the West is not causally or morally to blame. The West may still be a, perhaps even the – root cause, as the smoking example illustrates.

Notice that someone can, and plenty have, argued that Islamist ideology is not to blame for Jihadist terror attacks because the majority of those who sign up to Islamist ideology don't engage in terror attacks. That would be an equally crap argument analogous to Bloodworth's, but to the opposite conclusion - and another example of the Non Post Hoc Fallacy.

I think this fallacy deserves a name, and certainly needs to be more widely recognised given its popularity with dodgy politicians and journalists. It's right up there with slippery slope and ad hominem.

Paul Braterman said…
Nice piece. One popular example: "I grew up in a slum, and look at me now. So you can't blame poor academic performance/poverty in adult life/crime/smoking and other drug use on slums".

Two closely related fallacies; single factor causation, which is itself a variety of binary thinking, and Who Is To Blame (one answer only, please)?
December 24, 2020 at 5:02 PM

Anonymous said…
Hips are in, the curvaceous figure is back in style and wide hips are what it's all about, so read on, were going to give you some ideas on what kind of bikini looks best for women with wider hips.

A woman with a thicker torso has more options believe it or not when it comes to bikinis than a skinny torso, the reason for this is that fashion styles are changing and the movement in the fashion industry is a heavier, healthier look.