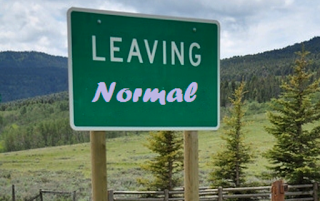 When people ask 'Am I normal?' they're often looking for reassurance. What they mean is: am I normal, or do I have some kind of problem that needs addressing? For example, they may ask: is it normal to feel this miserable, to struggle as much as I do to spell correctly, to be as interested - or disinterested - in sex as I am?

It can be reassuring to hear that you're normal - that you're not diseased, for example. However, sometimes that you're not normal is what you want to hear - you'd much prefer to learn that you have some sort of medical, learning, or other condition. For example, discovering that the difficulties they have with are not normal and that they have dyslexia can be a huge relief to someone who has been struggling with reading and writing. There's now the possibility of expert help, of acknowledgement of this particular disability when it comes to exam-taking, and so on. Those diagnosed with dyslexia can be reassured that they're not unintelligent, and that plenty of highly successful people have the same condition.

Mostly we use words unthinkingly. We entertain no doubts about what we, or other mean. However, once we put our philosophy hats on and ask: 'But what does this word mean, precisely?' we often quickly get out of our philosophical depth. Asking "But what does 'normal' mean, precisely?" is no exception. Here are a few attempts to pin down exactly what 'normal' means and some of the difficulties we can encounter.

One obvious suggestion is that to say someone is normal just in case they are fairly average, or like most people. It's certainly true that things that are common or average are also often deemed normal. For example, the normal temperature for a human being is the temperature human beings have, on average: 98.4°C. A normal IQ is an IQ that doesn't differ markedly from the average.

However, you might think there are obvious counter examples to this definition of 'normal'. Take having red hair. Surely that's perfectly normal - and indeed natural - for humans, yet it's pretty unusual. In fact, less than 2% of the world's population have red hair. Red is a perfectly normal - if rather unusual - hair colour.

Often when someone asks: 'Is this normal?' we need to ask: 'For what?' Take having a neck as long as your legs. Is that normal? For a giraffe, it's normal. But for a mammal? Perhaps not, despite the fact that giraffes are mammals. Is having red hair normal? For a Scot? Certainly. For a human? Very probably. For a Chinese native? Probably not. And even when the relevant group has been specified, there can still be considerable disagreement about where normal ends. Am I normal if I am in a minority of 10%, of 1%, of 0.01%? Perhaps our definition of normal in terms of not differing markedly from the average, or the majority, is correct: it's just that being in a minority of 2% does not make you enough of a statistical outlier to fail to qualify as 'normal'. You're just not unusual enough.

Another way of dealing with the red hair example would be to switch definitions. It seems we sometimes use 'normal' to mean something like 'natural', or 'what comes naturally'. At the hairdresser you might be asked 'Is that your normal hair colour?' Now the hairdresser might mean: is that your usual hair colour: the colour your hair is most of the time (dyed or not)? However they might instead mean: is that your natural hair colour (or is it dyed, say?). Having red hair, while pretty unusual for humans, is a natural human hair colour, unlike bright purple, which is artificial. So red hair is, on this second definition, 'normal' for humans, despite being unusual.

'Normal' may be used in other ways too. In fact isn't it sometimes also used to mean something like: how things should be? Take two-headed calves, for example. Such calves, we may say, are 'not normal'. And by this we may well mean not just that such calves are unusual - though they are - but that this is not how calves are supposed to be according to some sort of design plan. A two-headed calf involves a malformation: a failure to develop in the way it is supposed to. In fact, even if two-headed calves were fairly common - if they constituted 2% of all calves say, just as redheads constitute 2% of the human population - I suspect we'd still class them as 'not normal'. For, while being redheaded doesn't run contrary to how humans are supposed to be, being two-headed does run contrary to how calves are supposed to be.

Notice that a two-headed calf is something that occurs naturally every now and then. So such calves are normal in our second sense: they do occur naturally: just like red hair in humans. Yet they aren't normal in our third sense.

Also notice that being the way we're meant to be, according to some sort of design plan, is not necessarily a good thing, and deviating from it not necessarily a bad thing. Suppose it turns out that humans have, as a result of their evolutionary history, evolved to be highly selfish and violent. Selfish and violent is how nature intends each one of us to turn out, just as she intends calves to turn out one-headed. But then to raise humans to be generous and peaceful would be to thwart their natural design plan. Still, raising them that way might be a very good thing.

We have teased out what appear to be at least three different ways of using the word 'normal'. So let's now return to the question: 'Am I normal?' Someone asking this question may be asking: am I, statistically speaking, normal - for a human, say? Or they may be asking: is the way I am natural? Or they may be asking: is this the way I was supposed to be according to some sort of design plan - be it nature's plan or, if they believe in God, God's design plan? You can see that we may get very different answers depending on which question we are ask.

(From my book What Am I Doing With My Life?)

Fil Salustri said…
Whenever I read about normality, I'm always reminded of one of my favourite musicians, Bruce Cockburn, and his wonderful song, The Trouble With Normal, and in particular its chorus: "The trouble with normal is it always gets worse."