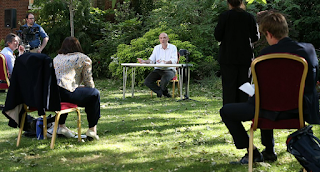 Had Cummings simply panicked and driven to Durham because of concerns about his children, well that's human and perhaps forgivable. But, looking at his story in the round, many of us are left with a different impression: 1. that Cummings repeatedly and deliberately flouted the rules designed to protect us all - rules that he helped draft and that others in the same position followed, and 2. that he exhibits the kind of knee-jerk, arrogant I'll-do-what-I-want attitude typical of someone used to being plugged into power and privilege.

1. Cummings did not just break the lock down rules once. He did so repeatedly. The suspicion is that he did so so that his family could enjoy being in the countryside and have the opportunity to visit tourist spots, rather than being holed up in their house central London. Certainly, his explanation makes little sense - particularly the part where he decided to test his eyesight by driving his whole family 30 or 40 miles to a tourist destination on his wife's birthday.

2. Cummings also broke the rules when he returned to work when his wife was ill and was correctly suspected of having COVID19.

3. Ironically, Cummings broke the rules yet again when he made a public statement at no 10 denying he broke the rules - The Ministerial Code is clear special advisors are not to enter into matters of political controversy to make their own statements.

There is a pattern to this rule breaking which suggests he thinks the rules that he helped create may bind others, but don't apply to him.

Cummings has said, 'My situation was exceptional'. It wasn't. Many thousands of parents were equally worried about having CV19 and associated child care problems, but they didn't drive 250 miles across the country, visit tourist spots, or return to work, all of which inevitably puts others at risk.They stayed at home, as they were instructed, to help keep others safe.

Incidentally, I suspect Cummings is right about one thing - he will get away with it.

POSTSCRIPT: I have noticed several posts on social media insisting that Cummings is the victim of a witch-hunt and in fact he did nothing illegal. The law says you can leave your home with a reasonable excuse, and Cummings' concern about child welfare was reasonable.

The problem with this response is that although what's illegal and what's contrary to the rules may not be the same, Cummings clearly broke the rules, whether or not he broke the law, and it's his breaking of those rules that he himself helped set that people are enraged about. Whether or not he strictly speaking broke the law is being thrown in as a red-herring. For most of us angry about Cummings behaviour, it's not the issue.

I see commentators are focusing exclusively on legality, and on the reasonable excuse Cummings might have for leaving his London home, in order to create the impression that he is the victim of a witch-hunt. Don't fall for it.

Paul Braterman said…
Fine textual analysis by Rachel Muers (whom you may know) on Twitter; I posted this with Cummings's full text at https://paulbraterman.wordpress.com/2020/05/26/cummings-an-exegesis-or-how-to-read-a-text-with-statement-in-full/
May 26, 2020 at 5:18 PM