Alien abduction: the story of Betty and Barney Hill 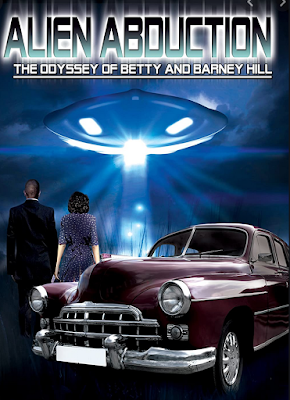 (Here's a draft from something I am working on - image is entirely borrowed. REVISED 18/6/21)

Jack takes a bite of cake tells Sarah about a second famous case.

JACK: Here’s a another UFO story I think you’ll find it hard to explain. It was the first case of alien abduction to get lots of publicity.

JACK: Yes - alien abduction is where humans are taken by aliens. This case happened back in1961. Betty and Barney Hill were out driving in their car at night. It was a beautiful clear night and the stars were twinkling. Then, after a while, they spotted a mysterious light behind them. It was a UFO! And what was most scary is that the UFO started to chase their car.

ILLUSTRATE: CAR BEING CHASED BY A LIGHT - PANICKED COUPLE INSIDE.

SARAH: The UFO chased them?

JACK: Yes! Scary, huh? Then, when Betty and Barney finally got home, they found that two whole hours had mysteriously disappeared.

ILLUSTRATION: BARNEY LOOKING AT WATCH AND SAYING ‘HEY, WHERE DID ALL THAT TIME GO?’

JACK: Yes – they simply had no memory of what had happened to them for two whole hours.

SARAH: That is weird.

JACK: It gets weirder. Later, Betty and Barney began to remember being taken by the aliens.

JACK: Into that spaceship!

ILLUSTRATE: TWO PEOPLE BEING LED BY ALIENS INTO FLYING SAUCER

SARAH: Did they see the aliens?
JACK: Yes, Betty and Barney both saw them. Barney said the aliens had no ears or hair or noses. And the aliens’ heads were shaped like bullets. He also said the space creatures had long eyes which seemed to wrap round the sides of their heads.

JACK: So you see - that’s what happened to Betty and Barney during those missing two hours. They were abducted by aliens and their memories 'wiped'. Later, their memories of the aliens started to come back. They began to remember their extraordinary encounter with the aliens!

ILLUSTRATE: ALIENS AS DESCRIBED EXAMING BETTY AND BARNEY WHO ARE STRAPPED INTO CHAIRS, HYPNOTIZED.

Now Betty and Barney were two perfectly normal people. They had no good reason to make up a story like this. So it seems we have a pretty good reason to trust them. It's possible they’re lying. But it hardly seems likely, does it?

Jack’s right that Barney and Betty’s story does seem very convincing. Certainly, many people believe that Betty and Barney really were taken aboard an alien spacecraft that evening. But I’m not so sure.

A closer look at Betty and Barney Hill’s story

Betty Hill described exactly what she saw that night in great detail. She said that the Moon was almost full. On previous nights Betty had noticed a star down by the moon, slightly lower. And then, on the night of the abduction, Betty noticed a second, bigger light above the first. Betty said:

ILLUSTRATION: BETTY SAYING THE FOLLOWING: ‘…IT HADN’T BEEN THERE BEFORE. AND I SHOWED IT TO BE BARNEY, AND WE KEPT WATCHING IT. IT SEEMED TO KEEP GETTING BRIGHTER AND BIGGER LOOKING.’

One possibility is that Betty and Barney initially saw the planet Jupiter, which was in just the position that the UFO was supposed to be. However, that wouldn't explain the UFO's movement and how, after appearing in front of them, it appeared to chase them.

Another UFO investigator called Jim McDonald researched their story in great detail, driving the road in which Betty and Barney claimed they were chased. McDonald discovered that a nearby mountain - Cannon Mountain - is invisible at night except for a bright white light on top. The position of this light as you drive past Cannon Mountain exactly matches the position of Betty and Barney's UFO. At first, the light appears ahead, then it gets 'brighter and bigger', disappears and reappears, and moves up and down and in just the way Betty and Barney described.

So it seems very likely that Betty and Barney's UFO was actually the white aircraft warning light on top of Cannon Mountain.

But what about Betty and Barney’s abduction? What about their memories of the aliens, who, according to Barney, had bullet-shaped heads, wrap-around eyes, and no ears, nose or hair?

In fact there's evidence that Betty and Barney were imagining things. What evidence?

Well, for a start, it turns out that Betty and Barney gave completely different descriptions of what the aliens looked like. Betty said the aliens had big noses, dark hair and were human-looking. But Barney said they had no hair, no noses, and weird, bullet-shaped heads. They also had wrap-around eyes.

Worse still, Barney’s aliens look a lot like the aliens on a TV show called The Outer Limits that was broadcast just two weeks earlier. Even the things Barney's aliens said were similar. On the TV show, one alien says:

[LLUSTRATE: ALIEN SPEAKING THESE LINES '…in all the unities beyond all the universes, all who have eyes have eyes that speak. I learn each word just before I speak it. Your eyes teach me.' END ILLUSTRATION]

ILLUSTRATE: BARNEY SAYING THE FOLLOWING (BARNEY’S A BLACK GUY)] 'They won’t talk to me. Only the eyes are talking to me. I-I-I-I don’t understand that. Oh, the eyes don’t have a body. They are just eyes.' END ILLUSTRATION].

That’s a bit of a coincidence, isn’t it? It suggests that Barney saw the TV show, and that influenced what he thought had happened to him.

This case is probably explained.

brenda said…
Patrick Nielsen Hayden's blog Making Light did an analysis of the Betty and Barney Hill incident back in 2007. The Hayden's are SF publishers and I loved that blog back in the day.

That should get you to the thread. Highly recommended reading as it is incredibly detailed. They debunk several myths surrounding the incident.

Brian Dunning also did an episode on the Hill abduction.