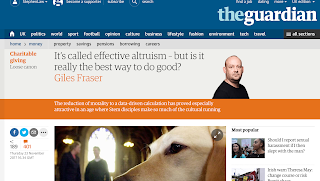 Giles says effective altruism 'forces all human need to express itself on a single comparable scale because of the giver’s rather nerdish requirement that the world possess some sort of measurable order'.

But surely the world does possess at least some sort of measurable order? The 'effective altruist' needn't suppose the right thing to do is always entirely measurable/rationally calculable. They need suppose only that in so far as we can calculate the most effective way to give, we should. What's wrong with that?


Effective altruists can also easily shrug off Giles' supposed counter-examples. Effective altruism involves just a commitment to using charitable giving in the most effective way possible. That's not utilitarianism, and it's not a commitment to, in Giles' example, saving the cash rather than the child, for saving the child is not charitable giving.

Giles raises a glass to the followers of effective altruism while at the same time taking the opportunity to patronise them as 'nerdish', 'evangelical', and 'blinkered'. Why? I guess because they're atheists, and he doesn't want folk rejecting church and attending their meetings instead.