The Left's Antisemitism Problem and Their Focus on Israel 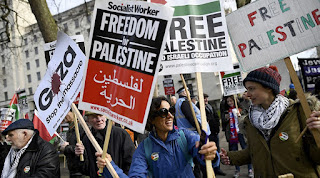 I have recently been engaged in a very interesting discussion on Facebook about the Left’s supposed antisemitism and Israel problem. It’s widely supposed Labour has a major antisemitism problem that needs to be dealt with. Of course, there is antisemitism everywhere, but is there significantly more among Leftists? That’s the suggestion.

I don’t see that the evidence supports the view that Labour has a major antisemitism problem. Labour has around half a million members. I noted that:

(i) As of last summer, after various accusations were made in the Press and social media examples had been cited, a total of around 20 suspensions of Party members had been made. Out of half a million members.
(ii) Press reports of alleged examples of Leftist antisemitism are anecdotal evidence – notoriously poor evidence. Finding 20, 50, 200, or even 2,000 examples of antisemitism in Labour would not establish that Labour had a particular problem with antisemitism. I would add that many of the alleged examples cited in the press in any case look pretty suspect.
(iii) The Chakrabarti inquiry looked into the accusations of significant antisemitism in Labour and found no significant problem. Chakrabarti is a woman who was very widely respected, though after her report came out many centrists accused her of corruption.
(iv) Channel 4 did an undercover investigation of Momentum, looking for dirt, including antisemitism. They found none.
(v) A recent study into antisemitism by the Jewish Research Policy found that levels of antisemitism were no higher among the left or far left than amongst the general population.
So, I concluded, the evidence for Labour having a major antisemitism problem is just not there.