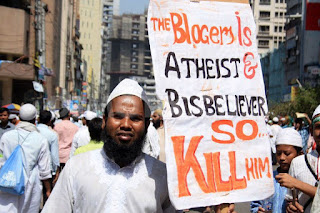 (This is reposted from CFI blogs, where it appeared 2015 - still relevant though)

In his recent post at the Daily Dot titled 'Atheism has a Richard Dawkins Problem', Ben Branstetter criticises Dawkins's targeting of Islam and the Quran as sources of bigotry and oppression.
Branstetter writes:

Dawkins seems to be targeting the treatment of women in many Islamic countries—which use religion to justify stoning rape victims and criminalize homosexuality. Dawkins is wrong, however, to target the Quran as the source of these atrocities: Atheists shouldn’t hold an entire religious community responsible for the actions of governmnents and fundamentalist state religions. Instead, Dawkins and his followers should attack the structures that allow for the systematic oppression of women and LGBT people.


Branstetter follows Steve Neumann in supposing that the root cause of such oppression is a delight in exercising power over others, which is by no means peculiar to religion:

Dawkins and his defenders are likely aware of the many atrocities committed in the name of Christianity—from the Crusades and the slaughter of Native Americans up to the bombing of abortion clinics. Likewise, Pol Pot, Joseph Stalin, and Mao Tse-Tung slaughtered tens of millions without a whiff of religious influence.


The problem with this argument is that to point out that Y often happens without X does not establish that X is not a major cause of Y. Plenty of people get cancer without smoking, but nevertheless smoking is a major cause of cancer.

For many oppressors, religion is the fundamental justification for their oppression, much as it was for European anti-semitism. To focus only on other factors will, therefore, be to miss a key cause. Compare trying to combat historic European anti-semitism without mentioning or targeting the Christian religion, when Christianity was actually a root justification. That would not have been effective, given the deep religious roots of that bigotry.

Islam has a particularly bad problem with its treatment of women, gays, and apostates. To ignore this contributes to the problem and betrays those moderate Muslims who are themselves trying to deal with such religiously motivated bigotry.

It is not just religious governments and a handful of fundamentalists that hold highly oppressive and bigoted views, it is significant numbers of mainstream Muslims who point to their holy books and authorities for justification. So, for example, polls indicate that even in the UK, 36% of young Muslims think the appropriate penalty for apostates is death, a third of all UK Muslims think a wife should be forced to obey her husband, and 0% of UK Muslims think homosexuality is acceptable.

I'm not suggesting religion is the root of all intolerance. I am suggesting e.g. Christianity was a root cause of European anti-semitism for centuries, and that Islam is similarly a root cause of some significant contemporary bigotry and oppression. That's not to say all religious are bigots or that religions can't change or anything crass like that. Nor is it to deny that, say, Western actions across the Middle East have resulted in very serious injustices which also fuel certain hatreds and bigotries and that this needs addressing too.

But not to acknowledge the causes and justifications of bigotry and oppression lying deep in certain religious ideologies - to try to paper over them out of some misdirected sense of tolerance, etc. - is a bad idea.

If you doubt Christianity was at the root of much European anti-semitism, and was indeed a root cause of the Holocaust, consider this brief extract from my bookHumanism: A Very Short Introduction.

The anti-Semitism was largely religiously rooted.

In1936, the Catholic Primate of Poland issued a letter, to be read from every Catholic pulpit, opposing violence against Jews. But read what he actually said:

…would, in the words of a contemporary observer, “again and again describe the Jews with great zeal as a foreign body of which the German people must rid itself, as a dangerous adversary against whom one must wage a struggle to the last extreme.”… Dissent was rare… One churchman recalls in his memoirs that anti-Semitism was so widespread in clerical circles that “explicit objection [to anti-Semitism] could not be ventured.”

With regard to the Catholic primate's letter, there's further text (with a slightly different translation) given here:
https://en.wikipedia.org/wiki/August_Hlond#Relations_with_Jews
More shameful history about which most catholics are probably completely unaware.

Anonymous said…
It's fair to claim a link between religion and bigotry and even point to a degree of oppression that is peculiar to some who claim to be guided by the Koran. You and Dawkins simply take it too far. When you claim Islam is the root, the obvious "solution" is to cut it. What evidence do you have that bigotry won't metastasize outside of religion? The alt-right tech crowd isn't particularly religious in the traditional sense yet they certainly have created a welcome home for misogyny. How seriously have you considered evidence that religion also helps ameliorate the most noxious consequences of bigotry? By pointing out alternative associations of bigots, maybe the author is suggesting Dawkins has the mechanism all wrong and that by rooting out religion you might actually create more problems than you solve.
March 18, 2018 at 1:48 PM