A 'cumulative case' for the existence of God? No. 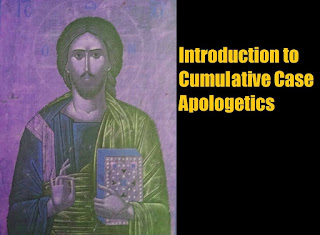 A cumulative case can be a powerful thing. You often find cumulative cases in a court of law. Suppose Jones is accused of murdering Smith. The prosecution might offer a whole string of arguments for Jones guilt: Jones' lack of an alibi, Jones' opportunity, Jones' clear motive, fibres from Jones' clothing otherwise inexplicably found at the crime scene, an eyewitness of Jones committing the murder, Jones' admission of the crime to a cell mate, and so on.

The real strength of such a cumulative case is this: while any one component argument or piece of evidence for Jones' guilt might turn out to be no good, what remains can still be more than sufficient to convict him. Even if the defence can show, for example, that Jones' admission to his cellmate was faked, the other evidence in combination might still be more than enough to put Jones behind bars.

But now consider an example of what some Theists like to call a 'cumulative case' for the existence of God.

And so they arrive at the conclusion that their God - the omnipotent, omniscient, and omnibenevolent God - exists.

An analogy is often drawn by Theists between this sort of supposedly 'cumulative' argument and a climb involving ladders. The first argument is the first ladder, which gets you a little way up the mountain. The next ladder gets you a bit higher. Eventually, the last argument provides your ladder to the summit, and the conclusion that God exists. A 'cumulative case' is built, raising us step by step from valley to summit.

Theists will often say about such a 'cumulative case' that even if the last step of the argument is suspect, that doesn't matter too much. Perhaps their ladders don't then take them all the way to the summit. But at least the ladders get them very close. Close enough for it to take just a modest leap of faith to put them on top.

In my opinion, this sort of 'cumulative case' argument is probably best not thought of as a cumulative case at all. It certainly lacks the sort of strength that we have seen is often exhibited by true cumulative cases made in a court of law.

Suppose Johnson has been killed. The accused - let's call him McLatchie - stands in the dock, and the prosecution make their case against him. They argue like so:

Now that is indeed a 'cumulative case' in our Theist's 'ladder' sense. We again climb up a ladder, arriving first at one conclusion, then working our way up to the next, until finally we reach the summit and the conclusion that McLatchie is guilty.

Now suppose McLatchie's defence team were to try the following move. The say, "But hang on, your final argument - that it's McLatchie that's guilty - is very shaky." In response, the prosecution say:

"Well, remember we are climbing a ladder here. Our case for McLatchie's guilt builds and builds! And most of our arguments are really good (that the killer is a human, had two legs etc.) - you can't deny that!

So even if the last bit of our case is wobbly, still the cumulative case for McLatchie's guilt remains strong! You must at least admit we've at least got pretty close to convicting McLatchie."

The truth, of course, is that the prosecution have got nowhere near finding McLatchie guilty.

We noted earlier that an attractive feature of cumulative cases is this - even if one bit of the case fails, the various other bits can still be sufficient to establish your conclusion.

But notice this feature is missing in the case for McLatchie's guilt.

So far as McLatchie being the guilty person, almost everything hangs on that one last argument.

All the defence need to do, to get McLatchie justifiably acquitted, is establish reasonable doubt about just that one last argument.

But then isn't the same true of our Theist's 'cumulative' case' for the existence of their God?

Again - almost everything hangs on that last bit of their argument - the argument for God's goodness - widely considered the most suspect bit! If that last step fails, their case for their sort of Theism collapses, in just the same way that, if that final step in the prosecution's case fails, the case for McLatchie being the murderer collapses.

Most importantly, if any one component argument of a true cumulative case argument fails, the entire case doesn't necessarily collapse. No component need be singly necessary. The failure of any one component can usually be compensated for by the safety net provided by the other components.

That, as I say, is an advantage of typical cumulative case arguments.

But as should now be clear, that's NOT what we have when it comes to the cases for Theism and McLatchie's guilt. Here, one component of the argument is absolutely essential. If it fails, the case collapses.

Note there are many people who might be guilty of the murder of which McLatchie is accused, even if all the other arguments making up the 'cumulative case' for McLatchie's guilt, bar the last, are sound. We're not close to finding McLatchie guilty yet.

But then there are many omnipotent and omniscient gods that might account for the existence, fine-tuned character, and so on of the universe. Including e.g. an evil God, belief in which we all still rightly consider absurd, not withstanding that the exact same sort of cumulative case can be made for him (differing only in that final step). Are we then close to establishing the existence of an evil God? Of course not.

So, it seems to me that if there's no good argument for God's goodness, we're not even close to establishing that the Judeo Christian God exists.

Graham Pound said…
After an initial reading, it seems to me that in the legal cumulative case, there is no dependency between individual parts of the case and no sequence that has to be followed. It's simply the totality or preponderance of evidence that convicts.

Whereas in the theistic 'cumulative' case, it's the sequence of arguments, and their dependency on each preceding argument, that in totality (and only in totality) leads to conviction. In this sense, I can't see that it's even proper to call it a cumulative argument. A better term would be a progressive argument?

Another nitpick would be that in your examples, in the legal case what's presented is an accumulation of objective evidence, where as in the theistic case what you're presented with is a dependent sequence of arguments. In that sense, these are not qualitively similar presentations at all.

My admiration and respect for you as an intellectual and philosopher can not be too overstated. You have a gift for, and I'll use the technical term her in the US, 'pooh-poohing' things. Oxford Dictionary states cumulative is "Increasing or increased in quantity, degree, or force by successive additions." A classical theistic case for God is no more or no less a cumulative case. Omnipotence is based on the idea of a Creator must be SO powerful to create a Universe. The other Omni's follow the case, as it is made.

I'm sorry, but this clearly is a case where you are negating a very legitimate way to 'prove' the existence of God (and His attributes).
May 8, 2017 at 6:05 PM

Phil said…
I have a different objection, which is that, so far from being a cumulative case which leads to a leap of faith, the whole thing rests on a leap of faith - or rather, a leap over doubt. Suppose that all things have a cause which can be conceptualised as an entity (which is a hell of a supposition, but let that pass), then the existence of the universe must have been caused by some entity. We then have two conceptual impossibilities: a causative entity which doesn't itself have a cause (haven't we just supposed that all things have a cause?) and an entity capable of initiating the existence of the universe: nothing in existence has anything remotely approaching that kind of power. Your theist quietly forgets objection 1, then looks objection 2 in the face, says credo quia impossibile and looks for the next rung on the ladder: assuming an omnipotent entity, what other attributes would such an entity need to have?

At the time, gods were pervasive, well, the belief in them. They all had roles and functions within society, but monotheism deviated and required that the being be elevated to all-powerful, because there are times that god actually fails (Judges 1:19, god fails because the coastal people had iron chariots, but by Judges 4, he figures out how to defeat iron chariots). It's more god starts out as a local deity and the omni-everything is added later and rationalized.
December 2, 2020 at 4:46 PM