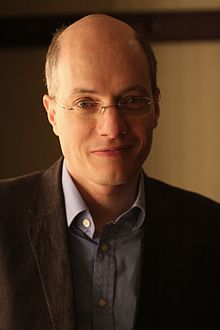 It was just suggested to me that I am 'similar to Alain de Botton' on philosophy. I do hope not. Not that ADB's not a lovely chap - he is (we've met: he's likeable and charming) - but I disagree with him pretty fundamentally about the value of philosophy.

I was reminded of this review I wrote of Alain De Botton's book The Consolations of Philosophy.

This review was published in The Mail on Sunday, back in 2000. (Was I too harsh?)

Broken heart? Take some Schopenhauer. Frustrated? Try a little Seneca. Money-worries? Epicurus can help. In The Consolation of Philosophy, Alain De Botton takes a novel approach to popularizing philosophy, explaining how six different philosophers can help us in six of life’s darker moments. Consolations is tied to a new six-part Channel 4 TV series Philosophy: A Guide to Happiness, also written by De Botton. Given the hype and the link to a TV series, the book is likely to be a best seller. But how good an introduction to philosophy is it?

It does sound like a great idea. The market for self-help books is booming. And popularizing philosophy has become sexy, especially since the success of Sophie’s World. So why not mix the two together in one winning formula?

But can Seneca and Epicurus really help us with our woes? The trouble is, dispensing practical advice on life’s problems is not what philosophers do best, even when they do it at all - which is rarely.

Take Epicurus on money-matters. Epicurus points out that money can’t buy you happiness. Having great wealth won’t make you happy if you have no friends. And with good friends by your side you can still be happy even if you have few material possessions. All true, no doubt. But it’s hardly very deep, is it?

Or consider Seneca’s advice on dealing with feelings of frustration - one is less likely to feel frustrated if one lowers ones expectations to something more realistic. You don’t say.

Yet for those beset by money-problems or frustration, this platitudinous stuff is pretty much all Seneca and Epicurus have to offer. If you genuinely seek consolation and practical advice you would do better to ask Miriam Stoppard and Claire Rayner.

Readers new to philosophy might be forgiven for concluding that if this is what philosophers actually spend their time doing - writing comforting “guides to life” - and if, indeed, De Botton has provided us with six examples of the best they have to offer, then philosophy’s reputation has been vastly over-inflated.

That would be a shame. Actually, philosophy really can enhance your day-to-day life, but not in the way De Botton suggests. Here’s how.

First, those who have never really grappled with the big questions lead impoverished lives. Like goldfish that lack any sense of what lies beyond the glass wall of their bowl, they have no real sense of the great mysteries that lie beyond the boundary of their everyday lives.

Secondly, and more importantly, those who have never taken a step back - who have lived wholly unexamined lives - are not just depressingly shallow, they are also potentially dangerous. To slip into the mental habits and unexamined assumptions of those around one is the mark of the moral sheep. And moral sheep are easily led astray.

Thirdly, the intellectual skills that exposure to a little rigorous thinking about the big questions can foster are valuable. Being able to formulate a concise argument, follow a complex line of reasoning or spot a logical howler is always useful.

De Botton is to be applauded for trying to make philosophy accessible and relevant to the lay public. Certainly, Consolations makes for a largely effortless read. De Botton himself comes across as witty, affable, scholarly and disarmingly frank. The book is full of biographical details, historical asides and personal reminiscences, all of which help bring the sketches to life. As an easy introduction to what six philosophers have to say on six perennial personal problems, Consolations is undoubtedly a success.

But before you rush to buy it, be clear what this book is not. It is not much of an introduction to doing philosophy. Those who wish to exercise their thinking skills won’t get much of a workout. The six chapters are almost wholly descriptive. There is no critical engagement with any of the ideas presented. Indeed, we don’t even get much indication of whether De Botton himself agrees or disagrees with any of the six philosophers concerned. We are simply told what Socrates said about this and what Epicurus said about that.

My main concern about The Consolations of Philosophy is the false impression it gives - that Western philosophy actually aims, among other things, to console us and dispense practical advice.

Here’s a quote from a review on Amazon that demonstrates just how seriously De Botton misleads his readers: “Philosophy is simply an old-fashioned term for what is now called self-help or counselling.” See what I mean?

Be warned - very, very few philosophers recognise this as the proper business of philosophy. Philosophy - like science - aims at truth. Sometimes the truth turns out to be consoling. But, often as not, the truth disturbs.

De Botton is at least partially guilty of dressing philosophy up as something it is not. He does so because he thinks this will make philosophy more palatable to the general public. Harmless enough, perhaps, so long as it is remembered that De Botton places centre-stage what philosophers actually do rather badly and pushes into the wings what they do well.