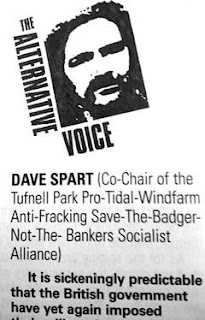 Well, I am aware that doing so is often just indicative of cognitive bias - pay attention to that which supports your preferred narrative ignore what doesn't. Am I guilty of that? Almost certainly - we all are.

(i) I am also aware that in certain academic circles people self-censor on this stuff given social/peer pressure, and I'm afraid that brings out the rebel in me (I'm wired in such a way that if I feel I am under pressure not to say something, I'm more likely to say it), and

(ii) MOST IMPORTANTLY, because I am VERY sure that the dominant narrative across the media is very skewed to the right and narrow in focus, so feel I need to do my bit to get other messages and evidence out there and discussion going. It's about moving the Overton Window.

Here's something I wrote back in 2012 on this subject.

Anonymous said…
Talk about cognitive bias... As someone who regularly reads Guardian, Telegraph, Independent and watches BBC I think three of the above have a left-wing bias. Needless to say I am leaning to the right. But the whole problem of bias depends on the assumption that it is possible to have an objective, neutral, unbiased view - view from nowhere? (hats off to Nagel). Don't think so.
January 18, 2016 at 12:31 PM

The Atheist Missionary said…
I enjoy your posts despite the fact that I am much more right leaning than you. I have always been fond of Maggie Thatcher's: "The problem with socialism is that you eventually run out of other people's money." In other words, socialism run amok leaves us in exactly the same boat as the workers in Ayn Rand's Twentieth Century Motor Company (see Atlas Shrugged). That being said, I have been influenced by Bill Gates' fairly essay: Why [Income] Inequality Matters b-gat.es/1wvzP2C so I try to keep an open mind on these matters.
January 18, 2016 at 2:00 PM

daz365 said…
I see the Guardian, Telegraph, Independent and BBC as ranging from center to right. I don't believe there are any left wing mainstream media. but I suppose in the same way as, "if you are a hammer everything looks like a nail" anything not as right wing as you is left and vice versa.
January 21, 2016 at 10:48 PM