From Geoff's Shorts (not by me)

November 20, 2012
Here's a post from Geoff's Shorts. He did an analysis for me, which is interesting and kind of amusing. Read on. The original is here. You should follow Geoff's blog, btw.

Sometimes it's nice to start from a point of idle curiosity. In a previous installment I prepared a word cloud of the Twitter biographies of those who follow Stephen Law and William Lane Craig. I drew no conclusions from it; there really wasn't enough hard data.

Stephen Law was kind enough to take an interest and we had a brief Facebook chat. I showed him another post of mine on the Discovery Institute. For that one, I'd pulled a list of everyone who follows the Discovery Institute. They're an anti-evolution group with delusions of science, saying their belief in an Intelligent Designer is not motivated by prior theological conclusions. Taking this list of their followers I then found out what each Intelligent Design fan followed. I put the results into a matrix and found that the majority of Discovery Institute fans have a pronounced primary interest in Christian apologetics and no interest in science.

Much as I enjoyed writing that post I find it hard to approach Craig's followers in a similar manner. For one, it would be ludicrous of me to point out that their primary interest is in Christian apologetics and present it as some sort of unexpected finding. Secondly, having met a few fans of Craig I find they tend to be doing their best to work out this mystery called life and are in the main pleasant folk, willing to converse with those of different viewpoints and generally open-minded. That I do not share their conclusions does not mean I do not hold them in some respect.

Let's look at the top twenty for each. First we'll look at those accounts that are most popular with William Lane Craig followers:

You can spot the trend, but at the risk of labouring the point it is not unexpected for Craig's followers to be united primarily in their interest in Christian apologetics. I'm heartened to see my fellow Irishman (C. S. Lewis) represented, and a mite disappointed to see Strobel riding so high. While I've read Strobel's work I found it too hackneyed and hyped to warrant review (check my book review tag), and I shudder to think I may have to once more force myself through The Case For Christ. I must confess ignorance of many on the list. If you have any interesting titbits, do comment below.
What of evolution? While it may be premature to say that Craig has taken himself off the fence and declared as an evolution denier, it is clear from his recent Q&A section that the fence at best no longer bears his full weight.

I wish him a speedy recovery.

What are his followers' views on the subject?

William Dembski and the Discovery Institute come a gratifying 160th and 161nd respectively - of 6005 accounts that met the threshold of having at least five followers in common with Craig. (I worked off a sample of 1,600 of Craig's 6,026 Twitter followers.) Extrapolating from the sample I see about 441 of Craig's followers with an active interest in the Discovery Institute and the same number for Dembski. I imagine the overlap is significant.

Disappointingly the rather good theistic evolution advocates biologos.org fared poorly, netting only an estimated 105 common followers. Worryingly this falls below those that believe the earth is under ten thousand years old: shared followers with Answers In Genesis are roughly 366. More favour the Old Earth Creationist position, with 731 enjoying the tweets of pseudoscientific old earth creationists @RTB_Official. While I don't greet the appearance of so many falling for the follies that are Intelligent Design Creationism, Young Earth Creationism, or generally treating Genesis like an inerrant science textbook, I do take some small measure of comfort when I see that most don't seem to hold a strong opinion on the subject. Here's hoping that in matters of science they favour scientific consensus.

What of politics? Seems to be a 60% 40% split in favour of Romney, but these stats were run post election - some Romney fans may have unfollowed.

Gay rights? Craig recently advised a gay man to marry a Christian girl. While bemusing to those of us outside the situation I'm quite sure this will lead the potential couple to much emotional pain. I did a search for 'gay', 'homo' and 'marriage' through the accounts favoured by Craig's fans. The only hit of interest was @GayPatriot, self-described as "America's leading gay conservative voice". Nothing homophobic or even against marriage equality turned up. I was expecting at least a handful - it is a delight to have my preconceptions and biases crushed.
What of Stephen Law? 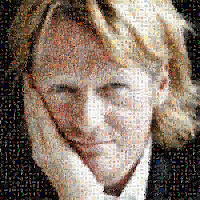 I'm sure Law will be thoroughly disappointed to discover that his followers favour science, philosophy, comedy, humanism and atheism over his talents as a jazz musician. (For those curious, the first philosopher to appear in Craig's list was Paul Copan at spot 46.) Barack Obama makes the top 20, but Romney attracts the attention of fewer than 4% of fellow followers of Law. I found no evidence of enthusiasm for Creationism, homophobia or anything else that could raise an eyebrow. In fact I found the exercise a great way of finding new accounts to follow.

If anyone has specific questions about Law's followers (or indeed Craig's) I'll be happy to edit and extend the article, but in lieu of additional text I've made a picture of Law by appropriately arranging the profile pictures of his followers. (now go to Geoff's blog and subscribe)

Geoff said…
Thanks for sharing - I enjoyed writing this. If anyone has any questions or needs more numbers do let me know.
November 20, 2012 at 2:03 PM

Darth Dog said…
"...I'm sure Law will be thoroughly disappointed to discover that his followers favour science, philosophy, comedy, humanism and atheism over his talents as a jazz musician..."