The Tory Party and the "Cui Bono?" test

October 06, 2012
The famous Lucius Cassius, whom the Roman people used to regard as a very honest and wise judge, was in the habit of asking, time and again, "cui bono?" ("To whose benefit?")' Cicero

Previously, I pointed out how, if we apply the cui bono test to the Tory party, I find it hard to avoid the conclusion that it is, at root, an organization the primary function of which is to promote the financial interests of the top 1% and big business, sometimes to the detriment of everyone else.

"Can anyone think of anything the Tories have done in this parliament (economically, I mean) that has not been about financially benefiting the rich and/or big business (i.e. their backers), typically with the result that the resulting financial burdens are loaded onto those lower down the economic scale? I can't."

Seven months later, I still can't think of anything significant. Even the much trumpeted raising of the personal tax threshold so important to the Lib Dems turns out actually to have benefited the top 1/3 of families most and the bottom third least.

Such comments often get the reaction, "Oh, that's just another conspiracy theory". But, having looked into conspiracy theories, and bullshit belief systems more generally (see my book "Believing Bullshit"), I still think it's a reasonable conclusion to draw.

Can we describe what's going on as a "conspiracy"? Some political conspiracies are real, such as Watergate and Iran/Contra. However, it's debatable whether the word is correctly applied in this case. Arguably, at least some of those engaging in a conspiracy to achieve x must consciously aim to achieve x. It's not clear this condition is satisified in this case.

Yes, it does seem to me that the Tory party's primary function is to work to advantage economically its rich backers. But I'm not suggesting that is something that e.g. David Cameron is consciously aiming to do. It is something he is doing, I think. But of course Cameron will justify his actions to others, and no doubt also to himself, in terms of e.g. right-wing economic theory. I imagine he tells himself, after a hard day handing over billions of pounds worth of NHS business to the people who fund his party, or handing out tax cuts to multimillionaires who fund his party, or slashing the benefits of those who don't, that we'll all benefit in the long run, that the wealth will "trickle down", etc. etc. These are his real aims, he'll say. He is, he thinks, a man of integrity. It just turns out that the best way to achieve his noble aims is to act in ways that happen directly to benefit his rich backers.

That, at least, is what the "cui bono?" test - in combination with the fact that the official justifications for flogging off the NHS, etc. etc. are hardly conclusive and are in many cases threadbare - suggests.

If the social and economic case for what the Tories are doing was in each case clearly watertight, there would be no case for saying that the primary purpose of the Tory party is to advantage the rich and big business. Yes the policy might as a matter of fact directly benefit the rich/big business. But that wouldn't be the aim of the policy. The aim would be to benefit everyone.

But when the social and economic case for doing what the Tories are doing is in many cases clearly less than convincing - and in some cases the weight of evidence is actually against the policy - the fact that the Tory policy is invariably one that advantages the rich and big business rather gives the game away.

I'm not saying this has always been true of the Tory party. But I think it's a reasonable belief to hold about that party now, given their track record in this term of Government.

Regarding the NHS sell off, I largely agree with Craig Murray, who writes:

"corporate interests own our politicians and control government policy. Private health providers have donated £16,285,437 trousered by the coalition parties who are privatising NHS services to them.... When I tell audiences that corporate interests control politicians, they want to agree but, having seen any establishment-critical analysis labeled “conspiracy theory”, some are often worried that I am going to start fantasising about the Illuminati, or at best am postulating an academic construct. I am not. I am talking about very real business deals and very real sums of money getting behind the politicians’ career-promotion, party funding and thus personal financial interest."

Continues here. More from Eoin Clarke here, and below. 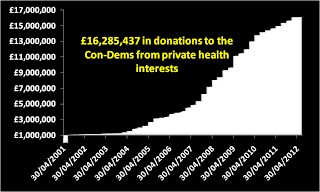 Manhattanchester said…
Great post Stephen. I have quoted you and been asked to explain if/how the economic policy of cutting arts spending benefits the rich? Thanks, Greg
December 2, 2013 at 12:12 PM

Stephen Law said…
Any such cuts in spending reduce the need for taxation, which falls disproportionately on the richer. The richer you are, the more you benefit.

As a selfish and very, very rich person, I'd favour cuts to the arts, because I can buy my own gallery from the money I get as a result.

The selfish and rich benefit from reductions in funding, switching to charging more (e.g. road pricing, student fees/loans), direct taxation in the form of VAT, etc. All these changes help them, and shove the resulting burden on those lower down the ladder.

By the way the bottom 20% of us pay more in tax than the top 20% when tax in form of VAT, road, fags and booze, council, etc. is also factored in. Which is why the rich tend to focus purely on income tax.