Daily Mail and the art of ad hominem

May 14, 2012
Here is an article in Daily Mail that nicely illustrates that newspaper's tendency to make ad hominem attacks. The suggestion seems to be that a rich person who is leftwing is a hypocrite. It is a standard Daily Mail smear, of course, to attack lefties for being hypocrites and champagne socialists.

However, isn't someone who fights for policies that are not in their own self-interest actually demonstrating real integrity, rather than hypocrisy?

And what's wrong with a rich person "disliking the rich"?

I imagine we'll see an awful lot of this sort of ad hominem attack directed at Hollande, who clearly rattles the DM, which, I imagine, is fearful of someone similar gaining power over here.

Of course a poor person who expresses left-wing views will be accused of "the politics of envy" (example here) - another ad hominem. Either way, if you're a lefty, the Mail will get you with an ad hominem!

The 57-year-old who 'dislikes the rich' and wants to revolutionise his country with high taxes and an onslaught against bankers is in fact hugely wealthy himself.

His assets were published today in the Official Journal, the gazette which contains verified information about France's government. 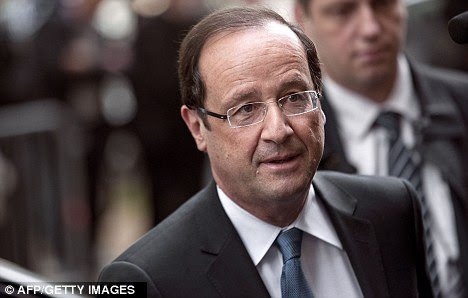 Mixed messages: Socialist president Francois Hollande portrays himself as an enemy of the rich - and yet he holds assets worth almost £1million

To the undoubted embarrassment to the most left-wing leader in Europe and a man who styles himself as 'Mr Normal', they are valued at almost £1million.

It will also reinforce accusations that Hollande is a 'Gauche Caviar', or 'Left-Wing Caviar' - the Gallic equivalent of a Champagne Socialist.

Among other assets are three current accounts in French banks - two with global giant Societe Generale and one with the Postal Bank - and a life insurance policy.

wombat said…
And what's wrong with a rich person "disliking the rich"?

Admittedly he may deflect some types of criticism since he has first hand experience of being rich so he might be able to quote some introspective consideration as to why he holds this view but it seems rather unfair on all those lottery winners who are transformed into objects of loathing at the turn of a number.

They're may be a problem with disliking Jews, period, whether or not a Jew does it. Ditto the rich. But that's not the issue being raised by the DM.

But in any case is that Hollande's view? Probably not. I notice one commentor looked into the origin of the quote and can find no reliable source.
May 14, 2012 at 2:32 PM

Dan P said…
In the United States, any discussion of a progressive income tax, or alteration of the current tax brackets, is attacked as promoting "class warfare" by Republicans.

If this were the 1950s, the expression would be "Communist".
On some Fox News stations, President Obama is referred to as Marxist, a mere ad hominem attack.

wombat said…
No extra problem so I agree there.
Self-loathing is entirely different from hypocrisy.

Anonymous said…
Stephen: Apropos the main event. How about drafting a petition for the teaching of critical thinking in schools? This pilgrim daughter from the States, where it is experiencing some success, is on her way to the UK.
Change.org petition site targets UK campaigners
http://www.bbc.co.uk/news/technology-18033968
May 14, 2012 at 4:33 PM

Dan P said…
What if you are a self-loathing closeted homosexual hypocritical Fundamentalist Christian Minister?

Anonymous said…
I'm no fan of the Daily Mail but the Left, with their 'do as I say, not as I do' condescension to the common man do present irresistible targets.

Like the clergy, the Left pretends to possess esoteric knowledge that they use to better the lives of their flock but, really, they're charlatans hoping we never find them out.

In its own clumsy way the silly, flailing, indignant Daily Mail ensures we don't lose sight of what utter, utter filth the political Left really is.

which points out many of the factural inaccuracies in the DM story and concludes that he is not rich at all
May 15, 2012 at 8:04 PM

Anonymous said…
While I am half French and my brother lives in France, I don't follow French politics as closely as I would like. However here are a few points to counter the Daily Mail's inevitably one-sided report.
While I don't share your atheism, I'm glad, Stephen, that you and I are politically on the same wavelength, and yes, it's something to be commended not condemned that a rich man should care for the plight of the poor.
• The hard left candidate Melanchon gave his support to Hollande in the second round - so was clearly not put off by Hollande's riches or concern that he might be a 'champagne socialist'.
• Only in Daily Mail land with its topsy turvy morality could Hollande's fair-minded treatment of Ségolène Royal be seen as dishonourable. Surely Hollande's conduct is to be commended, not condemned.
• One of Sarcozy's first acts on election in 2008 was to massively boost the president's salary, so again Hollande's act in reducing it is to be condoned, not condemned. The one to be criticised here is Sarcozy, not Hollande.

Thrasymachus said…
Not that I like defending the Mail, but:

(To clarify, let's just bracket the issue that the DM case might be a pack of lies, and presume they're right to say that Hollande, despite being a socialist, is loaded).

Hypocrisy charges along the lines of "If you're an egalitarian, how come you're so rich" (cf. Cohen) strike me as political fair game. It isn't like anyone is forcing Hollande to stay wealthy, he can always *give his money away* (for example, to effective charities that save lives for £300 a pop).

If you really thought that society should be egalitarian, that the wealthy are so because of iniquitous economic rents etc, then surely integrity demands you do not use these unjust deserts for your own pleasure. It would be even *worse* to not speak out about these things as well, but you should do both.

(It might be *even worse* to sincerely believe that these things are fine and so non-hypocritically live a rich life than be a champagne commissar, but both are still not on).

Obviously, none of this, if true, would make Hollande's beliefs wrong. But given we dislike having hypocrites as political leaders (like we ever get a choice etc. etc..) it isn't unreasonable for media to point out when politicians practice doesn't match up to their preaching.

On a personal note, I find the sort of left-wingers socialists who go on about social justice whilst keeping for themselves a salary several times higher than the UK median income utterly repulsive, even if I agree with them.
May 17, 2012 at 9:58 PM

Poetry Pleases! said…
If Hollande is worth less than a million pounds, he is worth less than 0.1 per cent of what someone like McCartney is worth. With four children to support, I don't think that even the Daily Mail could seriously describe him as 'rich'.
August 25, 2012 at 10:53 AM

Poetry Pleases! said…
Stephen, I think I've finally worked it out: If you're poor and a socialist (like me) you're envious; if you're rich and a socialist (like Ken Follet) you're a hypocrite. On the other hand, if you're rich and a Tory, you're a bastard (insert appropriate names) and if you're poor and a Tory (like my neighbour) you're just an idiot. Simples!
August 28, 2012 at 12:52 PM