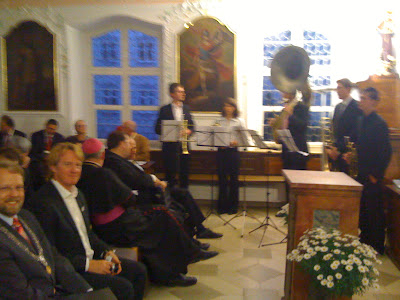 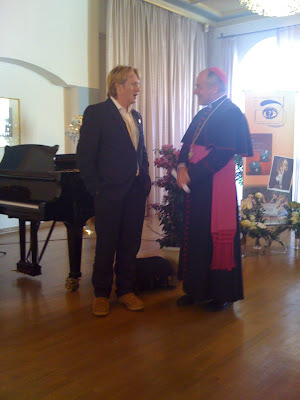 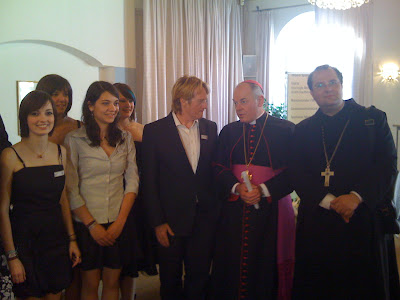 Just back from Bavaria where I had a wonderful time in Mindelheim, where I received the first ever Mindelheim philosophy prize. It was an extraordinary experience - unforgettable, in fact. My partner Taryn and I stayed in a hotel in town (great view of the square), visited the local school and met the jury of 17 year olds, who were an exceptionally gifted and friendly group. We met the mayor at a little reception in the Town Hall, participated in a Philosophy Cafe one evening, and had a great time with everything laid on. The award ceremony itself was very splendid with a cello concert by the cellist David Grigorian, followed by the ceremony with a speech from the former Bavarian culture minister. Afterwards there was a big band and fire show in the town square. I even got to play the drums.

My thanks to everyone in Mindelheim for making this such an unforgettable trip. Especially Hubertus Stelzer whose idea the prize was. Some rather crappy iphone photos attached. Obviously they provide considerable scope for humour at my expense. That's the (deputy?) Bishop of Munich, whom I liked very much. He said in his speech, "It is more important to have questions than to have answers."

And of course I got to see Neuchwanstein castle as well, on a beautiful sunny day. Child catcher wasn't in, though.

theObserver said…
Stephen is the only person in the bottom photo not wearing a dress. Trust him to break the dress code ! :)

Paul P. Mealing said…
A great honour, I expect. And the first, as well. You will go down in history.

Looks and sounds like you had a great time.

Kyle Szklenski said…
I was expecting you to say something like you tried to scale Neuchwanstein Castle without safety equipment, fell and broke both your collar bones. But congratulations anyway!
May 25, 2009 at 1:17 PM

you forgot some very important details:
1. You worked hard and deserve the price very well.
2. We (the Jury and Mr. Stelzer) were very glad that you are such a friendly person.
3. Mr. Losinger is the auxiliary bishop of Augsburg, not Munich.
4. I have to say that I hope all British people are like Stephen. Then I will probably emigrate from Germany. :)
5. Stephen will of course go down in history, having said the famous words: "Ich bin ein Mindelheimer" (I am a Mindelheimer) better then President Kennedy would have ever managed to do!!!

Kosh3 said…
Awesome, sounds like a wonderful time and warming honour to be presented. Can't believe you pulled a Kennedy though, haha!
May 26, 2009 at 1:43 AM

Anonymous said…
Well, I am afraid that would be too much to translate, but the article is nevertheless not a very good one. Stephen's report is shorter, but better!

And yes, it is now a word in German, a very popular one, but it is written wrong, isn' t it? Simply "LOSER", not "LOOSER", right?
As "lose" means being defeated, but "loose" means not fixed, or am I wrong?

Furthermore, the "Kennedy" was a brilliant one! (it is also in the newspaper article)

Kyle Szklenski said…
Yes, "loose" means "not in a fixed position", or in other words usually able to move about freely. "Looser" usually refers to clothing, it seems, such as pants that are "looser" than tighter ones.

Anonymous said…
Well, many Germans are so keen on everything American...
We really become American if do not are aware! :-)

Steven Carr said…
The pictures are not entirely clear.