How the Vatican saved Eichmann 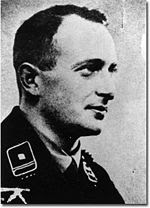 I have been reading Double Cross: the Code of The Catholic Church, by David Ranan, which was recommended to me by someone commenting here – anticant I think it was.

The book runs through Catholic behaviour down through the centuries, right up to the current problems with child-abusing priests. There are many jaw-dropping revelations.

Of course, it’s wise to approach such books with a sceptical eye, but it does seems very well researched and careful. Those bits of Catholic history I know a little about, such as the Galileo affair, are certainly accurate. Ranan doesn’t slide into the easy and sloppy exaggerations that less fair-minded books sometimes make.

One of the most shocking claims Ranan makes is that Catholic Bishop Hudal, a Nazi and Hitler supporter who actually published a book called “The Foundations of National Socialism”, worked from the Vatican to rescue Nazis and help them escape to South America.

Hudal was helped by SS Colonel Walter Rauff, the inventor of the mobile gas van.

This was a major Vatican-based operation involving other Catholic bodies including Caritas International, the Catholic relief agency, and spread over many countries.

The Vatican went to great lengths to save many prominent Nazis including:

and, wait for it…

Adolf Eichmann - architect in chief of the Final Solution.

Yes, Eichmann was shipped off to Argentina by the Vatican.

“The Church did not forsake the Nazis. She may try to maintain that any action undertaken to help them flee justice was carried out by persons acting as individuals representing their own interests. However, the collective magnitude of these actions, the number of people involved, and the resources used in terms of money, properties and personnel, tell a different story…. It was a Church operation.”

anticant said…
Pope Pius XII - the former Cardinal Pacelli - was the Vatican's chief representative in Germany for many years, and was the architect of the Concordat with Hitler's government whereby the large [and largely anti-Nazi] German Catholic Party was dissolved in return for the Church's retention of control over Catholic schools.

As wartime Pope, he has been strongly criticized for his failure to speak out against the Nazi persecution of the Jews.

Anonymous said…
Uki Goni, an Argentinian journalist, has written a great book about the various routes for Nazis and (perhaps largely) Nazi sympathisers to get out of Europe after WW2, 'The Real Odessa'. It's maybe not the most excitingly written book, but it's brilliantly researched. It makes it pretty clear that the some members of the Catholic Church were intimately involved, although, sadly, it wasn't unique in that.

georgesdelatour said…
We have to be careful here. There is a real case to be made, of moral failure by the most senior figures of the Catholic Church, at a historic moment of maximum human suffering. But scatter-gun attacks on what Pope Benedict did as a child are a distraction. Other contemporary figures, like Gunter Grass, actually come out worse in those terms.

I also think there's a danger of stretching this argument further than it can bear. Not everyone who tries to follow the teachings of Jesus will automatically wind up a Nazi. Clearly the White Roses didn't. Were there any Quakers in the SS? Certainly not practicing ones.

I hate it when some religious people - mostly American Protestants - say that all Atheists are really Satanists with no moral principles. But I don't want to reverse it into an antimatter argument - claiming that all Christians are just itching for the chance to burn heretics at the stake, punish modern Jews for their ancestors' alleged murder of Jesus, start a new Crusade etc.

As a child I knew a school priest who was a disgusting racist. But as a student I knew plenty of Christians who were active in anti-Fascist movements against BNP attempts to recruit undergraduates.

If religion is human-made, its "passionate intensity" can show us the worst and the best that humans are capable of. The Auto da fe and the St Matthew Passion, Pope Pius XII and Desmond Tutu. We don't diminish the case for secularism and humanism if we admit it contains both.
February 3, 2009 at 10:17 PM

- True, but there were many who opposed and rebelled against the Nazi's at the risk of their lives. If Pope Benedict is so godly and righteous, why did he wait till 1945 to desert (this is kind of late to be a saint, the war was at an end)? According to historic accounts he would have been operating as a Nazi for 5 to 7 years, and documents claim he was assigned to a slave labor camp where jews built aircraft engines.

My point? - Why the hell is this guy the Pope if Catholicism is truly appalled at the actions of the Third Reich and all who participated in those actions?
February 7, 2009 at 8:32 AM

Unknown said…
I do not think that the issue is Ratzinger's short stint in the Hitler Youth. This was 65 years ago. He should be judged by his present actions; Sadly, but not surprisingly, these prove that the Church is incapable of change. His recent reinstating of a holocaust denying bishop, is a case in point.

Seamus Breathnach said…
Any intelligent observer who lives in a 'Catholic country' could heap layers of confirmation on the findings of David Ranan's 'Double Cross'. The Catholic Church has run the government of my country (The Irish 'Republic') since I was a mass-serving child -- and long before it was a 'Republic'.

In getting the government to get the taxpayer actually to pay for the several clerical buggeries that happened to the children in their clerical charge, the fact of the church's hegemony is evident. It is less evident in the facts that are paraded to blame the 'building trade' for the Government's payment of 7.5 billion euros to the banks. The Church's financial interests in these banks are never revealed, even though their favourite Opus Dei lawyers have been appointed to guard the Government's very church-prone decisions.

Indeed, anyone who challenges the Papacy is now regardeda as a terrorist. And while the only question for a truly secular society is to figure out how to get rid of the RCC, not just in Europe, but in America, India, South America, East Timor, the Phillipines, etc., the Irish government has sent a warning to thinkers by drafting a Blasphemy law that would make Francesco Carotta, Joseph Atwill and David Ranan heretics.