NATURALISM VS. THEISM IS A FALSE DILEMMA 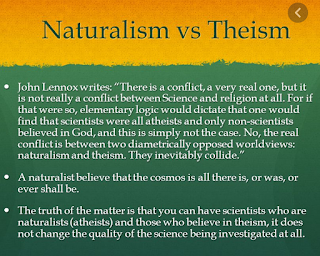 NATURALISM VS. THEISM IS A FALSE DILEMMA
(This is prepublication draft of my contribution to the next issue of THINK, which focuses on naturalism.)

Often, when theists attempt to make a case for theism, they contrast their theism with what they call 'naturalism'. Atheists, they insist, sign up to a 'naturalistic world view'. Indeed, it's because atheists sign up to a naturalistic worldview that they reject theism (naturalism is, if you like, the ideological engine that draws people into atheism). And they argue that naturalism, while widespread, has fatal flaws. We should, therefore, embrace theism.

This way of making a case for theism, while popular among religious apologists, is flawed. It is a classic example of the fallacy of false dilemma. Our options are not restricted to just theism or naturalism.

Many assume that naturalism entails atheism. They assume that if there's only the natural world, then God, being a supernatural being, does not exist (though see Fiona Ellis's contribution to this volume in which she defends 'a form of naturalism that promises to accommodate God.').

However, even if it's true that naturalism entails atheism, it's not true that atheism entail naturalism. Atheism is simply a lack of belief in a god or gods. Naturalism on the other hand, is (roughly) the view that there is nothing beyond the natural realm. So, even if a theist successfully refutes naturalism, it doesn't follow that they've refuted atheism. In fact, an atheist might successfully refute theism even while rejecting naturalism. They might show that there is no god even while acknowledging that not everything belongs to the natural realm.

Why are people attracted to naturalism? One reason is that they are sceptical about the supernatural. People who have little time for belief in gods, angels, fairies, goblins, and who reject the belief that we humans possess supernatural powers, will often identify as 'naturalists' just to make clear that they firmly reject belief in such 'woo'.

Philosophical doubts about naturalism tend to spring, first, from concerns about whether 'naturalism' is even a well-defined term. What is naturalism? A common first port of call is to say that naturalism consists in the rejection of belief in the supernatural. But what is the supernatural? Why, it’s that which isn’t natural, of course! But these explanations are, as they stand, entirely circular and uninformative. So far, no significant meaning has been attached to either. Beyond saying, unhelpfully, that (ontological) naturalism is the view that there's nothing beyond the 'natural', it's harder to define ‘naturalism’ than you might think (though I don't say it can't be done).

Famously, it's also philosophically controversial whether minds, or moral value, or necessity, can be fully accommodated with the natural realm. There are, notoriously, all sorts of philosophical objections to naturalism: objections relating to what we might call The Four Ms: minds, maths, moral, and modals. I'm not entirely confident all these objections can be dealt with (certainly - I don't know how to deal with all of them). So, though I personally lean towards naturalism, I’m by no means fully committed to it. I’m one of the many professional philosophers that's neither theist nor naturalist.

In response to these sorts of objection from the theist - ‘But how does mind, or moral value, or mathematical truth, fit into your naturalistic world view?’ - my response is not to attempt to defend naturalism but instead to shrug and say, ‘I don't know. But even if your objections successfully establish that naturalism is false, that leaves my atheism entirely unscathed. What are your arguments against atheism and for theism?’

The moral is: you don't need to get bogged down in unnecessary battles that you might lose, and that you certainly don't need to win, in order successfully to defend atheism or refute theism. Nor do you need to sign up to a 'naturalistic world view', whatever that is exactly.

Of course, someone could choose to argue for atheism by arguing for naturalism - some do, and I don't object to that. What I object to is the assumption that atheism and naturalism are a package deal: that not only does naturalism entail atheism, but atheism entails naturalism.

Making your atheism entail naturalism creates an unnecessary hostage to fortune. If atheism entails naturalism, then all a theist has to do to refute atheism is refute naturalism. Define atheism so that it entails naturalism, and critics will rub their hands together with glee knowing you've just provided them with a cupboard full of stock philosophical objections relating to minds, maths, morals, and modals. Whether or not any of these objections to naturalism are good, many are troublesome enough to get most atheists needlessly bogged down in an often pointless philosophical sideshow (I say often pointless - sometimes the theist argues not only that naturalism can't, but also that that only theism can, accommodate one of these things: that would be an argument that an atheist committed to the existence of minds, or moral value, or mathematical truth, etc. would need to refute).

It's possible, perhaps, conclusively to refute theism (or certain versions of it) even while acknowledging that naturalism may not be true. Perhaps the evidential problem of evil is fatal to the kind of traditional theism that posits a maximally powerful and good God, for example (I think it is fatal to that sort of theism, in fact). Or perhaps the very idea of such a deity makes no sense because it involves a logical contradiction or conceptual muddle. Atheism with respect to that sort of God might be entirely reasonable (I think it is entirely reasonable), even if it can be established that naturalism - whatever the term means exactly - is false.

Also notice, incidentally, that even if it can be shown that not only is naturalism false, but some form of theism must be true, that would not necessarily establish that the maximally-powerful-and-good God of traditional monotheism exists. There are many monotheisms to consider in addition to the very specific version embraced by Christians Jews and Muslims. Indeed, we might still establish that that very specific worship-worthy God does not exist (because there's too much evil, say), even if some sort of deity or cosmic intelligence exists (an all-powerful but amoral, god, say). In response to an argument that appears to show that the God of traditional monotheism does not exist, it really won't do to just reply 'But there has to be some sort of god to account for the existence of moral value and mathematical truth.'

In summary: my advice to both theists and atheists is:

2. don't assume that naturalism is what leads someone to embrace atheism.

3. don't suppose atheists must sign up to a 'naturalistic world view'.

Certainly, the reason that very many of us reject traditional monotheism, myself included, is not that we're wedded to naturalism.

Stephen Law is Editor of THINK and author of books including The Philosophy Gym: 25 short adventures in thinking.