I have been teaching philosophy at Heythrop College for seventeen years. This was my first full-time teaching appointment after leaving Oxford. Unlike many academics keen to climb the career ladder - and who consequently tend to migrate from one institution to another at the beginning of their careers - I have stayed put. I have remained here at Heythrop for my entire career. Why?

The answer lies in what I discovered when I arrived here. I quickly discovered just how unique and valuable an institution Heythrop College is.

We are small, which means that students and staff are known to each other. This is no vast and anonymous academic factory. This is a friendly place populated with familiar faces.

We are also a specialist college focussing on just philosophy and theology.

Wander the corridors of Heythrop College and you’ll find people deep in conversations about philosophy and theology. Irrespective of their religious belief - or lack of religious belief – all the students and staff at Heythrop are bound together by shared, deep interested in fundamental questions about reality, morality, and the human condition. Despite our obvious differences, we form a closely-knit intellectual family.

Heythrop is a hive of intellectual activity and world-class research is being done, but when I arrived soon learned that the staff also have that rare quality: they actually enjoy teaching. And they are skilled at it too.

These two facts - the fact that we offer an Oxbridge style tutorial system, and the fact that staff here really enjoy teaching – show themselves in the results our students achieve. Yes, we are less well-known than, say, Kings College London or University College London, and so we have more modest entry requirements. Nevertheless, our students do exceptionally well in their final exams. In fact, Heythrop actually has been known on occasion to achieve a greater number of first class honours degrees in philosophy than its other, better-known sister colleges.

And of course, if you take your degree at Heythrop, you will be graduating with a degree awarded by the University of London, which is one of the most prestigious and respected universities in the world.

As a philosopher, I am obviously concerned that, as fees increase and the economy flatlines, prospective students with a passion for philosophy may find themselves drawn by the siren voices of those who say philosophy is an impractical, “head in the clouds” subject of little relevance to real life.

Yet the irony is that, by choosing the subject they love, philosophy students are also choosing one of the most career friendly degrees. The skills it fosters are highly transferable and valued within, for example, the business sector.

In support of this, consider the GRE exam scores of those pursuing fifty different science and humanities degrees in the United States. The GRE exam is sat in the third undergraduate year, and has three parts: verbal, quantitative (mathematical) and analytical. How do philosophers fare? 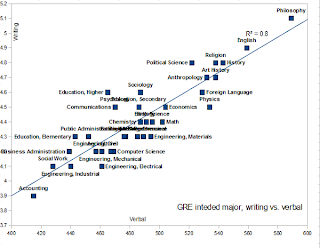 Out of fifty science and humanities undergraduate degree programmes, philosophy ranks first on the analytic component. No surprise there you might think. You’d expect philosophers to be great analytic thinkers.

But philosophy also ranks first on the verbal component of the GRE exam. It outperforms English, as you see on this graph.

Notice also how well those studying religion do on these tests.

Philosophy also ranks first out of all humanities degrees on the maths component (with only maths-heavy science subjects scoring better).

Philosophy also ranks first out of all fifty degree programmes on the law school entry exam.

Philosophy graduates are smart all-rounders. They possess a wide range of highly transferable skills that employers value. Do spread the word about that, please.

Heythrop is an extraordinary place and it’s time the college received the recognition it deserves. That is something we are now working on vigorously. Heythrop is one of British academia’s best-kept secrets and we are going to ensure that it is a secret no longer.

Next year, this college is, believe it or not, 400 years old. Our 400th anniversary gives us an excellent opportunity to promote and celebrate this college. I very much hope to see many of you here to celebrate our anniversary with us.

If and when you join us, you will discover, as I did, just how unique and valuable an institution Heythrop College truly is.

It is called Philosophy For Children...P4C for short...

I was talking to an English Teacher at Cherwell who uses such techniques to teach English...
November 2, 2013 at 6:07 PM

Philip Rand said…
Actually this is the official site:

What is Humanism? “Humanism” is a word that has had and continues to have a number of meanings. The focus here is on kind of atheistic world-view espoused by those who organize and campaign under that banner in the UK and abroad. We should acknowledge that there remain other uses of term. In one of the loosest senses of the expression, a “Humanist” is someone whose world-view gives special importance to human concerns, values and dignity. If that is what a Humanist is, then of course most of us qualify as Humanists, including many religious theists. But the fact remains that, around the world, those who organize under the label “Humanism” tend to sign up to a narrower, atheistic view. What does Humanism, understood in this narrower way, involve? The boundaries of the concept remain somewhat vague and ambiguous. However, most of those who organize under the banner of Humanism would accept the following minimal seven-point characterization of their world-view.

(Published in Faith and Philosophy 2011. Volume 28, Issue 2, April 2011. Stephen Law. Pages 129-151) EVIDENCE, MIRACLES AND THE EXISTENCE OF JESUS Stephen Law Abstract The vast majority of Biblical historians believe there is evidence sufficient to place Jesus’ existence beyond reasonable doubt. Many believe the New Testament documents alone suffice firmly to establish Jesus as an actual, historical figure. I question these views. In particular, I argue (i) that the three most popular criteria by which various non-miraculous New Testament claims made about Jesus are supposedly corroborated are not sufficient, either singly or jointly, to place his existence beyond reasonable doubt, and (ii) that a prima facie plausible principle concerning how evidence should be assessed – a principle I call the contamination principle – entails that, given the large proportion of uncorroborated miracle claims made about Jesus in the New Testament documents, we should, in the absence of indepen

Here's my central criticism of Plantinga's Evolutionary Argument Against Naturalism (EAAN). It's novel and was published in Analysis last year. Here's the gist. Plantinga argues that if naturalism and evolution are true, then semantic epiphenomenalism is very probably true - that's to say, the content of our beliefs does not causally impinge on our behaviour. And if semantic properties such as having such-and-such content or being true cannot causally impinge on behaviour, then they cannot be selected for by unguided evolution. Plantinga's argument requires, crucially, that there be no conceptual links between belief content and behaviour of a sort that it's actually very plausible to suppose exist (note that to suppose there are such conceptual links is not necessarily to suppose that content can be exhaustively captured in terms of behaviour or functional role, etc. in the way logical behaviourists or functionalists suppose). It turns o